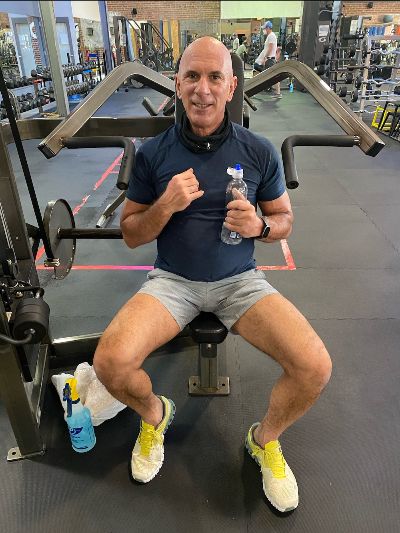 You probably already know that exercise helps you stay strong, healthy and independent as you get older.

But it also helps when life throws you a curve in the form of, say, an injury or medical treatment common to older people

Take it from Andrew Cuomo, 64, who contracted the coronavirus while in Europe during the pandemic’s earliest days last February or March.

“I got nervous about being out of shape. I looked terrible,” Andrew says. “I looked 20 years older.”

Before the trip, Andrew was in great shape, the result of years of gym workouts and a healthy lifestyle, when his job took him overseas for a few weeks. Initially, hotels and conferences were full, with not much sign of anything amiss. By the time his trip was concluding, masks were common and he was the only guest in his hotel in Bulgaria.

Within days after returning home to the US, he had trouble breathing, body aches, and a fever. His doctor told him he Covid-19 and said Andrew was so strong he should just go home and wait it out.

But Andrew was soon hospitalized for eight days. He dropped 30 pounds from his 5’11” frame, slept 16 hours a day, and lost his strength and stamina.

He knew he needed help, so he called a trainer, who brought equipment to Andrew’s garage for light workouts.

“He would wait when I got faint or out of breath. He would wait till I could muster the strength to do the next move,” Andrew says. “He didn’t coddle me. He pushed me to try different things, different exercises.”

After two to three months, Andrew was ready for a return to the gym – which by then had reopened – recalls trainer Christian Aguirre, left, with Andrew above. Christian says he focused on building up Andrew’s “foundational strength” by focusing on smaller muscles instead of the typical larger movements associated with weightlifting; physical therapy-like movements; warmups; and mobility.

‘It Helped Tremendously for Him to Bounce Back’

“He knew what he was doing with the movements, but like anyone who hadn’t work out in a while, he would get out of breath,” Christian says.

Andrew not only regained his previous strength but surpassed it. But it took months for his lungs to fully repair.

“He has developed really well over the months,” Christian says, noting that Andrew has progressed from bodyweight squats to 10 reps of 135 pounds. “It’s amazing. Plus his range of motion is better.

“Because he had been active and made it part of his lifestyle, it helped tremendously for him to bounce back. No matter what the setback older people have, their road to recovery for active people is much quicker to get back to where they left off.”

Andrew says his doctors told him his physical strength and stamina helped prevent the disease from being even worse. “It was because I took care of myself.”